What Is Altcoin Season, And How Can You Prepare For It?

Altcoin Season is the name given in crypto circles to a period of time when altcoins make significant gains against bitcoin. It’s typically a point in the market cycle when large profits are generated for lucky or savvy holders, with some alts making gains of 10-50x in a matter of weeks.

Alt Season isn’t always easy to spot in advance, but it’s well worth keeping your eyes open for signs that the market might be turning in favour of smaller-cap coins.

Within the broader macro trend, there are sub-trends. Bitcoin experiences many surges and pullbacks within an overall cycle. There is often some seasonality to these periods – for example, like the conventional stock markets, bitcoin frequently sees a ‘Santa Rally’, or a significant run-up in the three months before Christmas.

Bitcoin sets the pace for the wider crypto markets, which broadly follow it. When bitcoin rises, altcoins (i.e. everything that is not bitcoin) tend to rise too. However, the relationship is not entirely straightforward. There are many different sectors within crypto: currencies, DeFi and smart contract platforms, NFTs, L2s and more. Often, one or more classes of altcoins outperforms bitcoin, gaining value against BTC. Again looking at seasonality, Ethereum often does better in the first half of the year than the second.

‘Altcoin season’ is the name the crypto world has given periods of sudden growth in the altcoin markets.

In one sense, the causes of altcoin season are simple. Capital rotates from bitcoin into altcoins. To put it another way, traders take profits from their bitcoin gains, and use them to buy altcoins.

More important questions are why and when altcoin season happens.

There are two major factors involved in kicking off an altcoin season. One is available capital, or profits. The other is attractive opportunities.

The first tends to occur when bitcoin has risen sharply, and has either levelled off or is starting to fall. Traders will take profits, and put them into alts that they see as underpriced because they have been neglected in favour of BTC. This is a normal part of the market cycle; while bitcoin is soaring, that’s where the attention is. When it looks like there are no more easy profits to be had there, traders move to the next opportunity. The 2017 bitcoin cycle ended with a huge bubble that peaked on 17 December at just under $20,000. However, the altcoin market as a whole did not peak until 8 January 2018, three weeks later.

Unlike the examples of the Santa Rally and Ethereum’s H1 performance, ‘altcoin season’ does not take place at a particular time of year. It may occur when there is an exciting new trend in crypto. For example, 2020’s ‘Summer of DeFi’ was triggered by surging interest in the relatively new DeFi sector, and in particular the earning opportunities (‘yield farming’) offered by more and more protocols. More and more money was locked in DeFi platforms, and DeFi tokens rapidly increased in value.

One very simple way of gauging relative interest for bitcoin against altcoins is to look at Bitcoin Dominance: the percentage of the crypto total market cap that bitcoin represents. 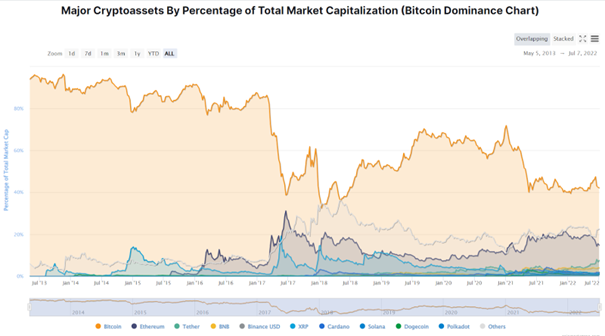 When dominance falls, it means that a larger proportion of the market is made up of other assets. A look at the chart shows significant alt seasons occurring at the beginning and end of 2017, and again at the beginning of 2021. The alt season that took place in the first few months of 2017 was the biggest to date (by this metric), with Bitcoin Dominance dropping from over 80% to less than 40%.

However, it’s worth noting that there can be more than one reason for dominance falling, since ‘altcoins’ is a broad category that includes stablecoins too. If thousands of new altcoins were launched and each achieved small gains, or if the supply of USDT and USDC increased by billions of dollars, Bitcoin Dominance would fall – but that would not necessarily mean significant gains for alts.

Still, Dominance is worth keeping an eye on as a good indicator for alt season.

If you’re looking to take advantage of alt season, you’ll need to decide when to move into the market, and which coins to pick up.

When to buy depends on your risk tolerance. As stated above, alt season tends to occur when bitcoin has recently had a big run-up, but picking the precise top is almost impossible. Some traders prefer to diversify as bitcoin first starts to show overbought indicators, others will wait until the top has been confirmed.

As well as using standard indicators like RSI, Bitcoin Dominance can tell you when interest is shifting in favour of alts. Look for a point on the Dominance chart where BTC’s share of the overall market peaks and starts to drop – but remember there are no guarantees.

The next question is what alts to buy. Again, this will depend on your risk tolerance. Large-cap alts like ETH and BNB often do well first, as traders rotate profits out of BTC into these ‘blue-chip’ alternatives, which are deemed safer than smaller alts, but that still have the potential to make major gains.

Sometimes, profits from these larger alts will then be rotated into overlooked smaller-cap alts, but of course, the smaller they are, the more volatile and risky they can be.

The other option is to look for a new trend that might be driving alt season, as happened in 2020’s Summer of DeFi. For example, if a metaverse project gains popularity, it’s likely the wider metaverse sector may also benefit.

Where and how to buy alts

TimeX’s team continually researches the market, staying at the forefront of the crypto space and looking for the best opportunities and most popular coins and tokens to list. As an AUSTRAC-regulated platform, TimeX is the ideal solution for both trading and storing cryptocurrencies.

Check out the top altcoins listed on TimeX, or find out how to get started on TimeX.